The Library has a range of fantastic events special and regular events. Check out our Facebook page and website for details of all our events and activities. Bookings can be made by contacting the library on library@westlib.co.nz or calling 03 755 6208

For more information about the upcoming events, check out our Facebook page. 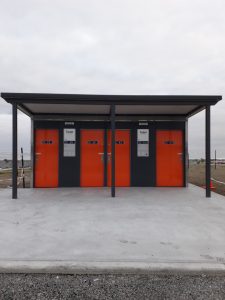 You can’t miss the bright orange toilets at Sunset Point. These are now open for business!

Further landscaping will be completed over the coming months.

Residents might be aware that banks in New Zealand will soon refuse cheque payments, and our local Westpac branch in Hokitika will close at the end of March.

If you have concerns about how to make payments to Council, please contact us so that we can help you with alternative arrangements.

You can make payments to us in the following ways:

Customer Service staff are happy to assist you to use our website to make a payment.

For more information about making payments, please contact Council on 0800 474 834.

Photo by rupixen.com on Unsplash

Adoption of the draft Consultation Document and the Draft 2021 – 2031 Long Term Plan is fast approaching. Councillors and staff have spent the last 18 months working on developing a plan that will provide value to the community, support maintenace of our asset base and ensure we continue to provide acceptable levels of service.

Before we can release the documents to the public, they must be thoroughly Audited by our Auditors, Audit New Zealand. This work will happen during April and Councillors plan to consult with the public during May and early June on our proposals.

While we intend to keep rates as affordable as possible, we also have to accept that there are new legislative requirements that we must meet. The age of our assets and the legislative requirements, mean that we continue to have a heavy capital programme, which we need adequate staff to support. We also face rising costs of levies imposed by the government for environmental purposes.

Our aim is for Westland to continue to be a place that our residents love to live in and this plan supports this aim.

Keep an eye on our website for more information and how to make a submission.

New at the Library

Become a guardian of our native fauna and flora by turning your home garden into a safe haven where they can thrive. The program will include Māori creation stories, suggested plantings to attract native birds, growing from seed, attracting native insects, endangered natives, Rongoa Māori (traditional healing), safe harvesting practices, identification, karakia and more. Keep an eye on the library’s Facebook page for dates.

Photo by Jason Gardner on Unsplash

Fox Glacier man Jacob, 22, was working as a Glacier Guide when Covid-19 hit New Zealand. It instantly changed the outlook of his career in international tourism. At the same time local restaurateur Erica McClintock was having her own struggles, a new restaurant about to open but major uncertainty about whether its tables would ever be filled.

During peak season the remote West Coast township hosts a population of around 400 residents. The main street buzzes with tour buses and visitors coming to marvel at the majestic river of ice, as it plunges through native bush toward the Tasman Sea. As the opening day of Betsey Jane Restaurant approached so too did the global pandemic, Erica found herself in limbo with a restaurant on the brink of opening while a nation was preparing to close down.

Despite the economic uncertainty Erica took a leap of faith and continued with her dream of serving food to hungry visitors at her restaurant near the picture perfect reflections of nearby Lake Matheson. The business is a relatively small operation employing four staff to cover the dinner shift seven nights a week. One of those is now Jacob. But it’s been a bit of a journey to get this far. When his tourism job was effected by the closing of the borders, his supportive boss’ offered casual work placements through DOC’s Jobs for Nature, but at heart a ‘people person’ Jacob knew he needed a career that suited his personality and that he would want to continue into the future; beyond Covid. He took a temporary farming position while he figured out his next step. When that work dried up he approached Erica, who he had previously worked with making burgers at the local farmers’ market and A & P show.  With local tourism trickling in she now needed staff, but didn’t feel confident about taking someone new on as alerts levels and lockdown threatened to flip her open sign to closed at any moment. Then Erica found out about the Mayors Taskforce for Jobs through a business contact. While hesitant about accepting assistance from MTFJ she eventually realised that it would be good for her, good for Jacob and give him the option to stay in his hometown rather than seek work elsewhere. She accepted the offer of a small amount of funding to fill two new employment positions. For Jacob too, it’s the perfect fit. With the assistance of the Westland MTFJ he not only has a job, but is upskilling and improving his future career prospects. He’s now completed three nationally accredited courses in Food Safety, Baristry and Liquor Licencing.

The Westland Mayors Taskforce for Jobs opened applications in September 2020 and has supported over 70 employment opportunities to date. For more information on eligibility and applying for funding see our website.